Announcement: This Week At The Science Circle: “The Anthropocene Epoch” 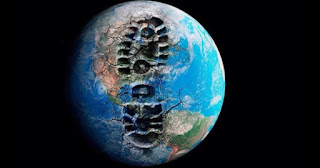 There is a saying that in English goes, “One cannot see the forest for the trees.” The traditional meaning is that it is difficult to see the bigger picture if you cannot see beyond your own little part in it. So it goes with seeing the bigger picture of global changes because we live on such a small part of our planet, and for such a relatively short time.

In March 2008, The Science Circle officially began its tradition of presentations of a variety of science topic with “The Anthropocene Epoch.” Ten years later, we will again explore the concept of geological epochs and evidence that humans have had such a significantly high impact on our planet that we are even now leaving evidence in rock and ice layers, in the atmosphere, and in the fossil record, that will be evident thousands and millions of years from now.

Some of the questions we will explore are: “How has the Earth changed over its history?”
“What caused those changes?” “What was the impact and how long did it last?” “How do we know?” “What natural changes are occurring right now on Earth?” “How are humans changing our planet and by how much?” “Are humans the only living things changing the Earth?” “What are the possible short and long-term consequences of our activities?” “Is there anything we can do about it?”

This is a subject that is having an impact on every one of us for centuries to come. Come join us!