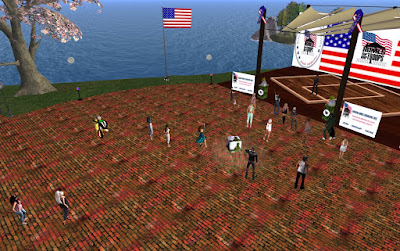 On May 20, Veterans Isle hosted a fundraising concert. The event to raise money for the Homes For Our Troops charity was organized in Part by Frets Nirvana. The performers scheduled for the event were DJ Waya Snowpaw and live musicians Hogan Baily, Paul Nowles, Melenda Baptiste and Wolfie Moonshadow.

I just attended one of their kickoffs for a home building here in Tennessee yesterday and cannot emphasize enough how impressed I am with the great work they are doing.  I met one Vet they built a home for five years ago.  A double amputee he expressed how this turned his whole life around.  His life has blossomed with a new wife, a baby on the way and a career that is moving forward.

Come on out today, support this great effort and kick off your Memorial week for the reason it was founded in the first place …to honor the sacrifices our vets make.    We once again we have a great lineup of talent: 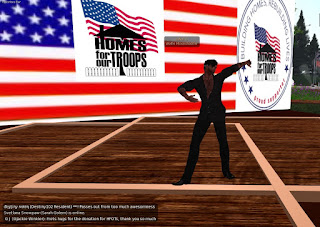 Yours truly dropped in as Melenda Baptiste was finishing her performance, and Wolfe Moonshadow was stepping up. Frets introduced Wolfe as a British Veteran, and thanked him for supporting his American peers. About this time, the two kiosks on either side of the stage had raised a combined total of 100,000 Lindens. Frets encouraged the people at the already successful fundraiser to give a little more. At the end of the event, a total of 122,000 even had been donated.

Veterans Isle holds benefits for HFOT every month, usually at the last Sunday of the month. But next Sunday being Memorial Day weekend, it was held a week earlier than normal.