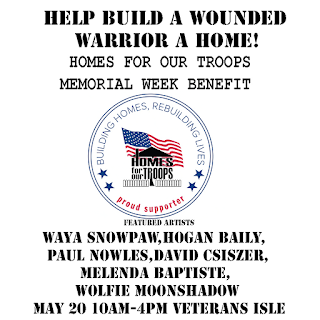 Frets Nirvana and US Military Veterans Group announce the 2018 Memorial Week benefit for Homes For Our Troops in Second Life!

Frets Nirvana, the premier guitar artist in the virtual world Second Life and the US Military Veterans Group announce the 2018 Memorial Week benefit on May 20, 2018 in Second Life for the Veterans Support Organization  Home For Our Troops .

ABOUT HOMES FOR OUR TROOPS  - HFOT builds homes as a departure point for Veterans to rebuild their lives, and once again become highly productive members of society. Despite their life-altering injuries, many Veterans have embarked on new careers, completed their college degrees, or started families. Empowered by the freedom a mortgage-free and specially adapted home brings, these Veterans can now focus on their recovery and return to their life’s work of serving others. Many have embraced their roles as motivational speakers, sharing their messages of persevering through tragedy with groups and classrooms around the country; others take to a national platform to promote awareness of veteran suicide, homelessness and PTSD. Their incredible stories are the driving force for the work for HFOT.  HFOT has received Charity Navigator’s highest rating of 4 Stars for six consecutive years. Charity Watch has awarded HFOT an A rating and included us on its list of Top-Rated Military & Veterans Charities.

To learn more about the Homes For Our Troops visit https://www.hfotusa.org
Posted by Bixyl Shuftan at 6:01 AM