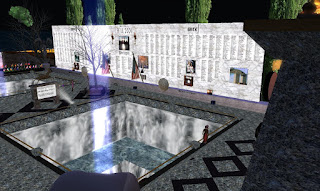 As Second Life gets ready to remember those who perished in the September 11 terrorist attacks on New York City and Arlington Virginia (and Pennsylvania), one of the most detailed memorials to them in Second Life has apparently vanished. The Stagg Island memorial is no longer online.

The memorial, part of the Stagg Island sim, was made by Geena Zackerly-Magic (Geena Zackerly) and Fazz (Fazio Magic. The names of those murdered were carved into a wall of stone, and the floor had two square holes of which water flowed down the side, and when viewed at Midnight beams of light went up, representing the Trade Center's twin towers. To the side, there were a number of national flags, representing those countries which had lost people in the attack. On September 11, there were ceremonies held to honor those who were killed, with recordings of news broadcasts and releasing of lanterns into the sky. 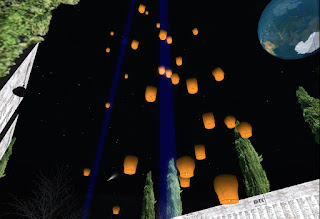 Over the years, there have been a number of memorials built to remember those who fell, from the large structure built in the dAlliez Land Headquarters sim, to Cheri Bing's New York City Block's World Trade Center memorial, and a number of others. There are still smaller memorials, such as the skybox one at Tenerife (118/143/1343, and the one at Sacred Ground at Urban Style (36/105/1695). But the loss of the Stagg Island memorial means the loss of one of the largest and most detailed, certainly the largest and most detailed in recent years.