Thursday September 13 was when the latest "Town Hall" event took place. Linden Lab's CEO Ebbe Altberg, known inworld as Ebbe Linden, appeared and answered a number of the questions that had been posted in advance on a community forum thread. The video that Linden Lab made of the event lasts an hour and nineteen minutes, taking a couple minutes to start. 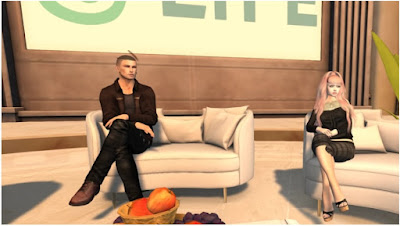 Several issues were discussed. On the issue of last names, Ebbe backed off a bit from Linden Lab's earlier commitment for the option of them to return for newer accounts by the end of the year, "Maybe we'll get that done this year. ... We don't have an exact date or time."

Someone asked why the grandfathered sims from 2016 weren't included in the land tier cut in June this year. Ebbe responded that those taking part in "the 2016 buy-down" benefited if they kept their land for six months or longer, and while grandfathered land might not be as cheap compared to retail as in the past, it was still cheaper. Ebbe went on to say that Linden Lab would likely lower prices again sometime in the future, they were still waiting to see how much of an effect their last price cut had, "when and how much is still undecided." He did say when they did cut them again, they would likely raise other fees to make up the difference. Ebbe went on to say that they preferred that sim owners hang onto their land for a while.

On the issue of why spend so much time with "backwards compatibility?" Ebbe answered it was to avoid breaking things and"When you have an economy in which people buy things ... and then the things they paid money for stop working, people get upset."

On the issue of future transparency on economic data, would the statistics about Second Life once reported by Linden Lab earlier in it's history be done so again, such as the number of  unique 30 day logins, Ebbe answered that they had started to publish again some statistics that they had been quiet about foa while, but, "We probably won't restore all." He went on to say the Lab wants information that helps create business for Second Life, and some info wouldn't be in their best interest if revealed. "It's a balancing act."

On Animesh, Ebbe stated, "Animesh around the corner. ... a few bugs away." On environment enhancements, "possibly in weeks." Of the next Gridwide experience, Ebbe wasn't sure if the next one would be finished before the end of the year. On Linden home improvements, he hoped to release them, either all at once or in stages, later this year. Of plans for Marketplace, upcoming changes included options for "wish lists" and "favorite sellers." Gachas might also be more clearly identified on the Marketplace, "maybe."

The new SSP region was asked about, someone asking, "What does SSP stand for?" Ebbe just joked about it, suggesting the "P" stood for "Plesiosaur," a flying dinosaur. Someone also brought up the empty gaps in the Second Life map, asking why they couldn't just put water sims between them. Ebbe responded, "we can't afford to put water sims in all the blank spaces between sims, and some private island owners might not want us to."

The last twenty minutes were a "Casual Q and A" with questions from the audience. Ebbe stated some questions were best left to Oz and Grumpity Linden, "The more specific you get, the more you lose me" Someone asked if Linden Lab could come up with 24 hour support. Ebbe answered no, "I don't think you would be willing ot pay for that service."

Someone asked if the Lindens personally use SL? Ebbe answered, "I rarely have time to use it like a proper user" as he has ten hour work days. He did say of Second Life, he will "drop in now and then ... get inspired by the stuff you all do." He considered himself more of a "test user" there. Of Sansar, he spends "99%" of his time there in a VR rig, "That's the killer feature for me."

More information on the Town Hall can be read in Inara Pey's article.