Relay For Life 2019 Season to Start in February, Relay Weekend on June 8 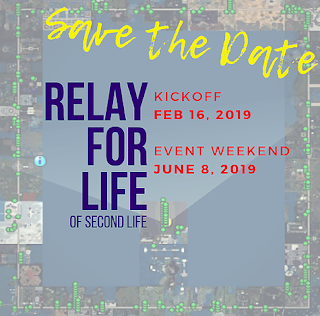 For years, the Relay for Life fundraising season had it's Kickoff in March and had the Relay Weekend in July. This changed this year when the season started a month later. After some brainstorming, it was decided to shift the season a month early. In 2019, it will be starting on Saturday February 16, and the Relay Weekend will be on Saturday June 8 and Sunday June 9, "This will be the first time in the history of the event that it will be held in June."

On www.slrelayinfo.com, Stingray Rainmaker, "referenced Second Life demographics and economic metrics as the initial reason for considering moving the event date from its traditional mid-July weekend. 'Our volunteers all had an opportunity to weigh in on this decision and the overwhelming feedback was in favor of holding Relay For Life of Second Life in June because it will allow our season to start earlier, when more residents are logged in and active.'"

This will be quite a change for the Relay as this puts the high point of the season, the Relay Weekend, in the same month as the Second Life Birthday. While the two events won't overlap, some people who were planning to build for both may be rethinking their plans. What we can say is that they way the Newser will report both events may be a little different than previous years. It's sure to be an interesting Relay season.