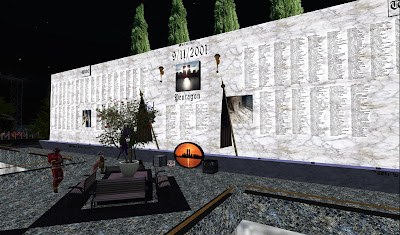 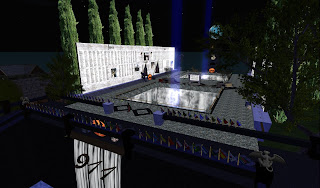 Yesterday, the Newser reported that Stagg Island sim had vanished, along with it's memorial to the fallen of the terrorist attacks on September 11, 2001. It turned out that the memorial is still around. It had been moved to the Yellow River sim.

Talking to Smoke Texan, one of the people there, he explained, "Well the creator, Faz (Fazio Magic) passed away in December, So Geena (Geena Zackerly) his partner moved it here 'cause it was cheaper. So a few of us are having auctions and such to help her pay her tiers to keep it open." The auctions will be starting on the "13th and go to the 20th." Smoke did say they could use a few more items donated to be auctioned off, "We've gotten bikes and log cabins and riding tracks so far. Geena really tries to do it herself, but I know she needs the help." 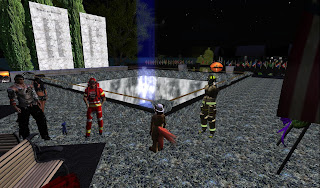 In both text and voice, Smoke and his friend Phoenix Nightfire explained there are future plans for the memorial, depending on how much is raised. It is likely the memorial will be placed at the top of a motorcycle track. But the important thing is keeping it online as a lasting memorial to the fallen of the largest terrorist attack on American soil.

Editor's Note: Gemma Cleanslate and Deaflegacy were the ones who found out the place was still around.