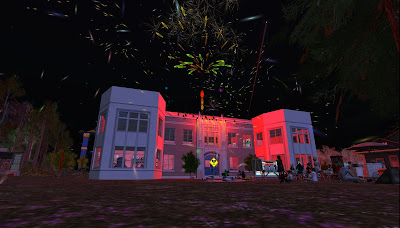 Every Saturday night in the summertime at 8PM SL time, Marianne McCann of Bay City likes to head to the schoolhouse at Livingtree, invite her friends over, and shoot off a few fireworks. But Saturday September 1 would be the last Saturday night before Labor Day. And thus this would be the last one, "So, tonight is it! My last firework show of the Summer! It'll start at 8:00 p.m. SLT, but you might want to come a bit early and grab a seat. Come on down to Livingtree, if you wish!" 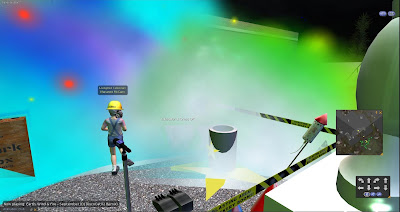 As the crowd watched, Marianne lit off firework after firework. "Good thing the school is fireproof," someone mused, "Well, bricks don' burn too easy maybe." Down below, DJ GoSpeed Racer played songs such as "Summer Moved On" by A-Ha, "September" by Earth Wind and Fire, and "Back To School Again" by the Four Tops. A few would hit the ground, and result in colored clouds on the ground, "Almost drug induced lights." 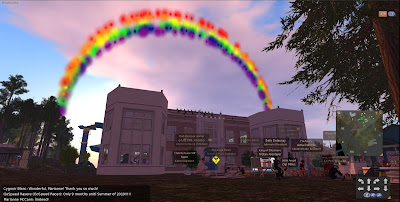 At 8:28, GoSpeed was playing her ending theme, "Man or Astroman.""I end all my Fireworks sets with this tune," she explained. The crowd applauded, "Another awesome summer of fireworks." "Only 9 months until Summer of 2019!" It was mentioned that "Hot Bay City Nights" didn't take place this year due to the person who usually made the plans being unavailable. So with the fireworks gone, Bay City has several weeks until the next event: the Creepy Crawl.

And with the rainbow of lights, the fireworks were over, at least until next year.