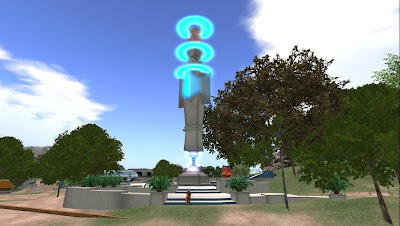 "That is something Lumiere created for Planet Mongo," Avi spoke of the tower, "few things of his have survived as he rarely took stuff into inventory. So, I took the tower and created the base for it and pavilion around it." The base had a few models at the outer edge of what looked like "Flash Gordon" style spaceships. The tower itself had a base with a thin section of glowing blue rings. Higher up were a few larger blue rings rising and lowering around the top part.

To the west a short distance is another structure. This one is brick, and resembles a more conventional memorial building. "The upper area is the actual memorial itself," Avi told me. In the front is a metallic statue of Lumiere's "Spy vs Spy" inspired avatar, with prims between it's hands, "Had one member create his statue which Kennylex also had a hand in making." Inside the building are a number of objects placed together, the memorial "houses the objects people gave to me to place in remembrance of him, at the actual memorial service itself."

Avi Arrow is working on another project. But details are mum until it's closer to being finished.