Lumiere Noir, Creator of the Ivory Tower of Primitives, Dies 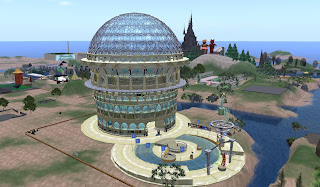 Most longtime residents, especially builders and scripters, know about the "Ivory Tower of Primitives." For those residents wanting to learn how to build and script at their own pace, this library if infor mation in the Natoma sim is the most well known and one of the best places to go to. The one behind this library of instructions and tutorials was Lumiere Noir, whom created the Tower very early in Second Life's history, possibly shortly after it's begining in 2003, and has since helped maintain it, with the help of Avi Arrow and Kennylex Luckless. 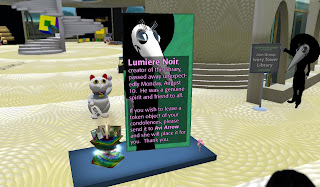 It has been recently revealed that the person behind the avatar Lumiere Noir has died, passing away on Monday August 10, 2015.

I chatted briefly with Kennylex, " I do not know so much about him personal, but he was the Founder of the Ivory Tower. ... He was the one and only that did build the tower I think." He explained the Tower wasn't originally built in Natoma, but "The first Tower was located in Noyo, It was a huge party here when the tower was moving here, it was a big event for the whole of Second Life." 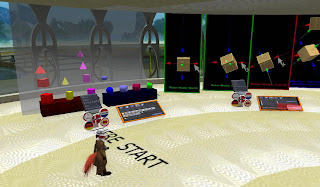 Kennylex went on to say, "Natoma and The Ivory Tower was one of the first places I did come to in SL and the reason that I did stay so long."

Kennlylex pointed to an article in the "Not Possible in Real Life" blog. There in an interview with Bettina Tizzy, Lumiere identified himself as Vince Frost of Plano Texas, a teacher of English as a second Language. "I love to make things and I love to teach," Lumiere spoke when asked where the idea for the tower came from, "Making the tower was a natural thing for me as a teacher." He didn't like teaching inworld, so he created the tutorials.

Lennylex told me that Lumiere's avatar was active, but being used by a friend to make some adjustments to the tower.

Torley Linden did a video about the Ivory Tower of Prims in May 2008 (link), "Its kind of like visiting a candy factory to see how your favorite sweets are made," came one of the comments. He also took a number of pictures in his Flickr (link).

Lumiere was known for appearing in a "Black Spy" avatar, of "Mad Magazine's" "Spy vs Spy" comics.