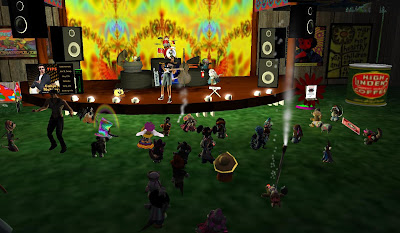 From Friday August 14 to Sunday August 16, the Tiny-themed community of Raglan Shire held their "Wootstock" event. The event was a mix of 60's counterculture and music, and the good-natured silliness and fun that Raglan's Tinies are known for.

The event was presented by the Raglan Shire Artisans Society. A number of DJs and musicians performed at the festival. Among them, Jaycatt Nico and Frogg Marlowe, Maximillion Kleene, Beth Odets, and Ganjo Mokeev, whom was performing on Sunday afternoon when I dropped by. The crowd gave him quite an approval, "APPAWS!" "PAWSHOME EXPERIENCE!!" "Tiny  HOOOOOOOO!!!" "Yesh!" "YEAH!! GANJO!! ROCK!! ROCK!! GANJO!!" And there was the usual Tiny silliness, "Ok now I don't need to bite Ganjos ankles. Woohoohahahaha!" "AWWAYS da time fer waffahs!" "Got to get ourselfs back to da Waffle House!!" 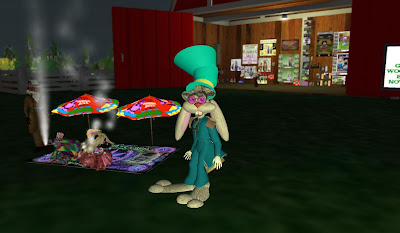 Not everyone at the event was Tiny. The musicians's crowds of fans happily followed them over. There were also some notable personalities from outside the Shire there, such as Toady Nakamura of Grendel's Children and RacerX Gullwing of the Snail Racers. Toady had turned into a psychedelic-colored frog, and RacerX had changed his black hat and suit to something resembling the front cover of "Sgt. Pepper's Lonely Hearts." 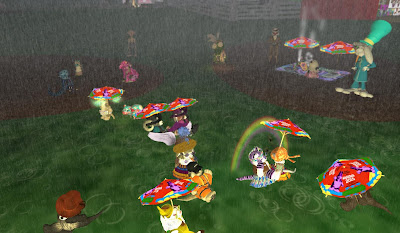 The weather wasn't all sunny, but had it's own unpredictability. Woodstock in real life was known for it's mud, and mud comes from rain. At one point, the whole sim turned grey, and as the focus sharpened, it turned out to be a downpour. The Tinies then reached for their umbrellas.

Lots of fun was had by all.