While Burn2 is still weeks away, fans of the event can still have some Burner fun with a spinoff event, in which you can go for a spin. The "Burn2 DMV Crazy 8 Races." On Saturday August 29, Residents are "are invited to participate - by watching, playing, driving, and just generally adding to the fun! The races will be all day, anytime." 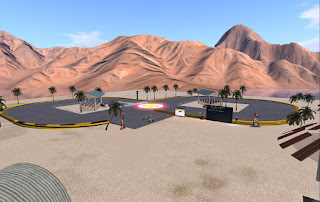 The brilliant Burner brains at BURN2's DMV have concocted another fun day of racing for you, coming up on Saturday the 29th of August!
The DMV has constructed a figure 8 track on the Playa and has loaded up the rezzer with about 25 different vehicles to choose from! We will have some goofy feature races throughout the day and finish the event off with a dance party and fireworks!
You're invited to participate as a driver or passenger, or just sit and watch the hilarity ensue. 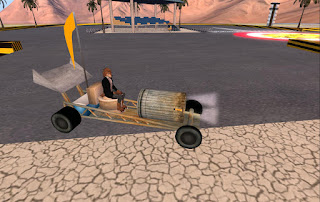 Heading over to Burning Man Deep Hole, the track and vehicle rezzer were already ready for anyone wanting to practice for the event. And as advertised, there were plenty of crazy vehicles to choose from. One thing that wasn't mentioned was the "Crash" circle in the middle of the track, sending cars running over it into the air.

There's a trophy there anyone can pick up, but those at the event will really know who won.

The schedule for Saturday is as follows: 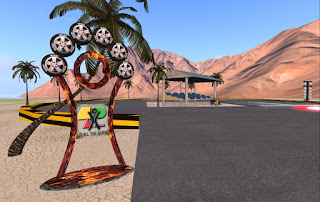 There was already a race last week on August 22, so some racers may already have had some practice.

Details about this and other Burn2 related events can be read at the Burn2 website: http://www.burn2.org/.