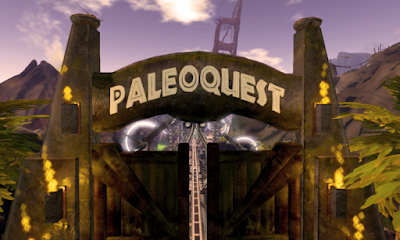 On Friday July 30, Linden Lab announced details about a new game for the residents to play within Second Life: PaleoQuest. 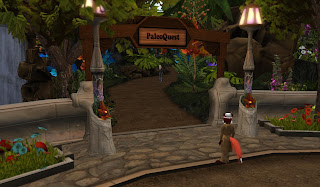 Magellan Linden put the moles to work building a theme park on the latest hunk of land discovered in Second Life… but something’s gone horribly wrong! Uncover the mystery of a menacing plan and explore six exciting regions teeming with dinosaurs and valuable collectibles in PaleoQuest. The evil Dr. Talpa has mangled space and time - colliding past, present, and future into a single point in time - which happens to be at the PaleoQuest Theme Park. Are you the dashing hero the world needs to stop Dr. Talpa from taking over? The rewards are great - but so is the risk! Dare the treacherous obstacles that lay in waiting,  and uncover a wealth of hidden tools and items that will aid you in your quest for fame and adventure. Fortune may await those with bravery and determination - you can redeem your findings for prizes and Linden Dollars!*

To play the game, Head to Portal Park and look for the sign that says "Paleoquest." The path it leads down goes to a glowing portal. Going through it, requires accepting "Experience Keys," meaning a HUD will be attached to your avatar, and if you get clobbered, you'll be sent back to the game's home base. The home base is the first place in the area you see, which has a video explaining the plot if the game, and some of the prizes you can win,

Paleoquest is just the latest interactive experience for the residents by Linden Lab, previous examples being The Cornfield, last year's Haunted Halloween Tour, and Linden Realms. It's also the second dinosaur themed thing they've gotten into this summer, their first being their "Party velociraptor" they offered the residents for the Second Life Birthday.

Gemma Cleanslate has been exploring Paleoquest, and we should have her review of the game soon.