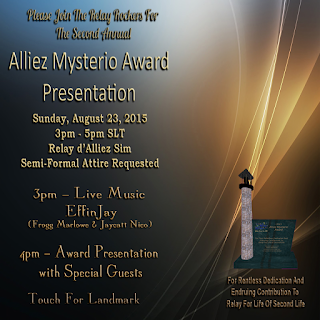 The Alliez Mysterio Award is presented each year to the person or persons who, in the opinion of the team's award committee, have exhibited "Relentless Dedication" and have made an "Enduring Contribution" to the Relay For Life of Second Life.  The award, which memorializes team co-founder Alliez Mysterio, who was lost to Breast Cancer in the fall of 2013, was first awarded in 2014 to Nikki Mathieson and Dwen Dooley.

Alliez, one of the original Second Life Estate owners, helped found the Relay Rockers with Nuala Maracas (2015 Relay Event Coordinator) and T1Radio's Trader Whiplash during the SL's first Relay season in 2005.  The team, which has participated in all 11 virtual relays was the top fundraising team this season, earning the Ruby Fundraising award and amassing more than $15,000 of support for the American Cancer Society.

"Alliez was a steadfast supporter of Relay For Life and the Rockers" said the team's founding captain Trader Whiplash. "We miss her dearly and this is a way to allow us to honor her memory while recognizing her own enduring contributions to Relay and to Second Life"

The team was led this season by captain Sue Peregrine who along with team co-captain Melodie Jigsaw, Elizabeth Tinsley of Fantasy Faire and Elrik Merlin of Prim Perfect  Productions, received Relay For Life's  prestigious 2015 Community Champion Award. They were joined by co-captains Ariel Goldrozen and  Arizona Ballinger.

The celebration will be held at Relay dAlliez, the dAlliez Estates sim dedicated to all Relay Teams.  Since 2014 the sim  has been the sight of more than 50 team and multiteam events.   Frogg Marlow and JayCatt Nico open the festivities and will be followed by the Awards presentation ceremony and Team Thank You party.

The Relay Rockers invite the entire Second Life community to join them for the celebration.