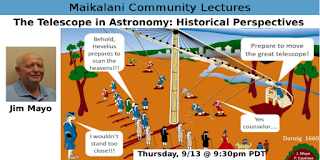 And on the web: http://tinyurl.com/ifamaui

In “The Telescope in Astronomy: Historical Perspectives,"  Jim Mayo discusses the emergence of astronomy as one of the most ancient of all sciences going back to the world’s earliest civilizations. Starting with “Astronomy of the Ancients” to include Egypt, Babylonia, China and Phoenicia, the focus moves to Greece and Rome, and then to Arabic and early European astronomy.  The critical telescope precursors of the 16th Century are covered leading to the explosion of the telescope onto the scene in 1608. Mayo covers the development and early astronomical use of refractors and reflectors, the emergence of the achromatic object glass in the 1750s, the large refractors of the late 19th Century, and the great reflectors of the 20th Century.
Posted by Bixyl Shuftan at 6:01 AM