Lately it seems the Internet has been under assault. With the end of Net Neutrality in the United States, some companies have already started throttling traffic. In August, Verizon was caught throttling the Internet connection of California firefighters while dealing with a huge wildfire. One digital rights spokesman spoke of the incident, “If Verizon was willing to do this to a fire department during the state’s largest wildfire, when public safety should have been paramount, it’s easy to imagine what they are willing to do to everyday consumers.” 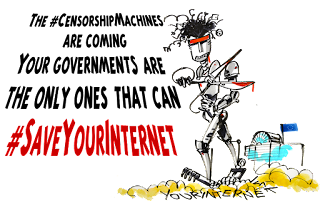 But unfortunately, the worst seems yet to come, and not from the United States. The European Union recently approved  legislation that has been described as threatening to "break the Internet," As Cory Doctorow explained in "New World Notes" and an "Electronic Frontier Foundation" article. Two parts of the bill, Article 11 and Article 13, have gotten the most attention. Article 11 is the "link tax," which requires platforms such as Facebook and Google to "to pay news outlets for the privilege of linking or quoting articles." Wikipedia, which would be badly hurt by the legislation, called it a threat to "freedom of expression ... online." Gizmodo commented the legislation would, "make it all but impossible for Wikipedia and other non-profit educational sources to do their work because of their reliance on links, quotes, and citation."

Article 13 would mean bad news for Second Life and other virtual worlds that allow users to create content. They would require any platform or website "that allow users to post text, sounds, code, still or moving images," etc. will have to create "upload filters" to compare all uploaded content to a database of copyrighted works, "that will be compiled by allowing anyone to claim copyright on anything, uploading thousands of works at a time. Anything that appears to match the 'copyright database' is blocked on sight, and you have to beg the platform's human moderators to review your case to get your work reinstated."

That the owners of Second Life and other platforms that fall under this bill are headquartered outside the EU won't necessarily protect them, "The EU has treaties with most of the world that allow for civil judgments to be collected in some circumstances; it's likely that future trade-deals with the EU (like the recently completed EU-Canada trade deal) would require that trading partners allow EU companies to sue and collect judgments under the EU Copyright Directive. That means that even non-EU companies could be forced to comply with these rules." And if they got in trouble with the EU over copyright issues, "those companies would not be able to establish sales/support offices in the EU, their executives would face civil and possibly criminal sanctions if they visited the EU, and they would be at risk of losing their ability to receive payments from EU customers."

Developing such a content filter in the first place wouldn't be cheap. "Google spent $60 million developing the ContentID filter system that is only capable of analyzing audio-tracks of video." Something that would analyze everything from pictures to meshes to avatars would be considerably more expensive. It would certainly be beyond the ability of smaller virtual worlds such as the OpenSim grids to pay.

And how good would it be? Most likely it would err on the side of caution, and much content that resembled copyrighted material instead of matching it would also be blocked. A content creator who found his goods blocked would have to appeal to a human moderator, and if that failed, the only recourse might be a lawsuit. Complicating the issue further are "copyright trolls" As Doctorow explained, ""[T]his is a boon for griefers. Since the rule has no penalties for abuse, griefers could claim copyright over public domain works, works that others had created, etc, and block other players from using them -- you could upload every military insignia, the logo of a rival clan, etc."

The bill doesn't go into effect right away. It will go into closed-door meetings between EU and national government representatives, then next spring the language gets voted on, then the 28 member states' governments debate on their own versions of the bill, and there are court challenges. But companies like Second Life's Linden Lab face a stark choice, either pay huge sums of money for filters that will anger their users, or block IP addresses from European countries with such bills. As Second Life has thousands of European residents, this would be a very sad, and costly, move for the Lab.