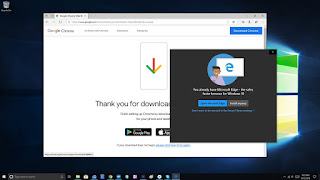 While PC users have been frequently using Microsoft's Windows 10, most pass up it's web browser, Microsoft Edge, in favor of the popular Firefox and Chrome. It's used less than Apple Safari, which is limited to the much smaller Apple computer market. Microsoft's old browser Internet Explorer has gotten a reputation for being slow and buggy, so besides people being used to the more familiar browsers, they may be a little too wary of the old "E"'s problems to try the new one. But rather than try an advertising campaign to convince people to use their browser, it seems Microsoft has instead decided to take advantage of it's operating system to push it's other product.

Lately when Windows 10 users try to download Firefox or Chrome, their installation is interrupted by a popup reminding the user they already have Microsoft Edge, "the safer, faster browser for Windows 10." While Edge may be a fast browser, this popup is not only annoying and frustrating, but it may confuse some less than experienced computer users into thinking the more popular browsers are unsafe.

This isn't the only time Microsoft has been pushy with computer users about choices of browsers. Last year, it's debut of Windows 10 S would not allow users to instal other browsers on laptops.

Microsoft's move isn't just annoying computer owners, but also people in online computer magazines. Matthew Humphries of PC Magazine was polite, "Microsoft, please don't do this. Focus on making your software better, prove to us that it is, and market it as such. You already have the advantage of Windows 10 shipping with Edge." Joel Hruska of Extreme Tech was more blunt, "You are training your end users to expect that with each new Windows release, they must spend time digging through settings to find all the things you stealthily changed and shut them off again. This kind of subterfuge encourages customers to view the update process as fundamentally adversarial, because it requires us to spend time shutting things off rather than giving them a chance to function as intended. It encourages end users to believe the worst about your company’s practices and behaviors. When Microsoft chose to make Windows 10’s upgrade advisor pushier and more aggressive, it didn’t just make people angry; it fed a narrative of distrust and deceit, priming people to believe that MS wanted them to use Windows 10 so it could collect and monetize data based on how individuals use their computers. If you ever wonder why people harbor such suspicion towards Microsoft, take a look in the mirror. It’s because you’ve taught them to. ..."

In the meantime, Windows 10 users grumble about this latest annoyance, which for some may make them wonder if it was worth upgrading from 7 or 8.