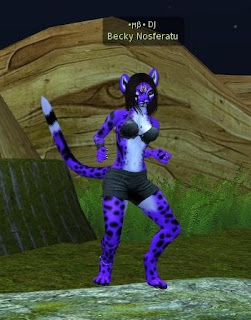 It was almost a month ago in which Becky Nosferatu's real-life sister was admitted to the hospital for an aneurysm in the brain. Becky didn't have the money to make what could be the last trip to see her, so she called out for help for people to donate a little cash. People in both Second Life and real life responded, and she had enough to make the trip over. Over the weekend, she offered the following statement.

So for those who are in the know, my sister was hospitalized due to a mild stroke that caused an Aneurysm. She's been hospitalized for a month now, due to them not able to get her levels stable enough to have a surgery to REMOVE said Aneurysm.

Long story short; on Tuesday the 11th, she was strong enough to get the surgery and lived through it. I asked for donations, scrambled up any money I could from RL and Online Friends so Monica and I could go see her. She's doing fantastically well, far better than any of the doctors could have imagined and by next week, she will be out of the ICU and being sent to a rehab hospital to get her legs back (She was in a medical coma that had her paralyzed from the neck down for a whole month, mind you) and to heal her tracheostomy wound.

I was only gone for a week, but I can't thank any of you enough that has donated money and linden dollars. That whole week was me preparing to see her, which I did yesterday. They told us that we had to put on like... these weird gowns that where really scratchy and rubber gloves. I left my cane in the doorway so it didn't bring in any bacteria.

It was painful, for both of us. She, like me, wasn't expecting at all what would happen. She was laying on the bed, on her back. Her hair was wild and there where so many tubes and wires going everywhere all around her. She had her hands wrapped up because of the tube from her tracheostomy, you know, so she didn't rip it out. And she was writhing on the bed. I think she was still really to delirious to understand what was going on, but when I entered, she stopped moving around.
She saw me walk into the room, didn't realize it was me (cause I keep my hair so short now,) and went wide-eyed when she saw me. I took her hand, and smiled and said "hi, sis." She immediately started crying. She mouthed the words... something along the lines of "Why are you here?" Or "Why did you come here?" or something to that effect. I just leaned over and told her "Because I love you." There wasn't anything more needed to be said. We both just started crying and I wiped her tears away with a napkin. I told her that I was so proud of her for getting this far, and that after all that's happened, for her to never stop fighting. She was still... uh... pretty sedated; kept looking around the room and I noticed she focused on Monica a lot. So I looked back at her and she started crying again. I caught the words "She's so pretty" or "She's very pretty," but I couldn't be to sure. I told her I wouldn't be there long, that I flew all the way to just see her and she told me "You shouldn't see me like this." I told her that I would see her no matter what, cause I loved her. Then we both REALLY started crying. By the end of it, I just rubbed her arm and said "You stay strong, you hear? Prove to the world us FAMILYSURNAME are the strongest there is." And I told her bye.

The rest of that day was... hellish. I couldn't sleep, I had allergies and nightmares. Dad and I both where super irritable and our road rage was even worse than normal. But I'm glad I saw her. It made it very real in my head what she went through. What her son and husband went through. And the rest of our family.

This was far more than I intended to write, but, I'm glad she's recovering. And I hope that she gets to go home soon to her 3 year old son and her husband. And I honestly couldn't have seen her, or the family I haven't seen in over 10 years. I feel she'll only get better now, as the stent they put in her did exactly what what they expected. She can only get better from here. She will never be, 100%, but she is still my sister and my family are nothing but super fiery ***holes that don't know when to quit.

Again. I thank you guys far more than what you could ever know.
Becky Nosferatu
Posted by Bixyl Shuftan at 6:03 AM