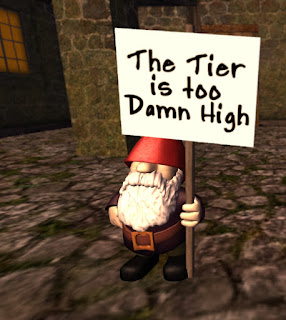 For years, residents have asked Linden Lab to lower what it charges for sim tier. Yesterday, in a "limited time offer," the Lab announced a chance for landowners to lower their monthly tiers to "Grandfathered maintenance rates." This means lowering the rate for regular sims from $295 USD a month to $195, and homesteads from $125 USD to $95.

But, there's a catch. First, the offer is only good until October 4. Second, to lower the tiers, one needs to pay a one-time fee, $600 USD for each regular sim, and $180 for each homestead. The deal does not apply to sims receiving the non-profit discount or those under it's "Skill Games" policy.

This move comes several months after the Lab's decision in November to reduce set-up fees for private sims.

Ciaran Laval, after a joke that the Lab was trying to make the "protest gnomes" (pictured above) redundant, called it "a good deal," at least for those who have the money up front. Jo Yardley commented, "This offer comes at an interesting time because by the time it ends, Sansar will have opened to a lot more beta testers and if all goes well, we’ll be months away from it opening to the main public. Who knows how things are going in SL by then?" She called it, "A good deal and another step in the right direction, but still, $600 is a lot of money," suggesting the Lab could have done a little better by allowing landowners the option to pay in installments. Hamlet Au was hopeful the move could help stop the long slow decline of Second Life's sim numbers, which have fallen below the 25,000 Level, less then 17500 of which are privately owned. In the thread on the topic in the official Second Life forums, reactions were somewhat mixed, one calling it a "cash infusion" strategy for the Lab, another commenting "if I were a non-grandfathered land baron right about now, I'd be doing one heck of a happy dance."

Time will tell how the move will affect Second Life.