Our "April Fool's" joke on Friday got a number of comments. While one thought it was in bad taste due to the subject matter being of someone she didn't like, most had a chuckle out of it. Daniel Voyager for instance told the Newser it was one of the funniest April Fools he had seen pulled. He later posted a link to it on the SL Universe forums. Many gave it the "peanut gallery" treatment, though one man commented, "That was a far better April Fool than LL's official one." 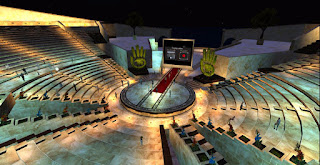 The "official joke" by Linden Lab was posted on their blog at 10AM on April 1, saying they had an "Exclusive Message" for Second Life residents inworld, hinting it involved their next virtual world, Project Sansar. People were asked to head to the meeting point of the four Town Hall Islands sims, where there was an auditorium. Daniel Voyager was there, writing that about 150 avatars were there at one point.

And the exclusive message: Rick Astley's "Never Gonna Give You Up." Or as Daniel put it, "You All Got Rick-Rolled By Linden Lab." On the official forums, someone suspected it was a joke. In SL Universe, there was a variety of comments from "Linden Lab's Poor Effort at Comedy" to "Rickrolling is indeed lame, low effort and old. But it can still make me smile at the right time, and when I heard about LL's april fools this year I smiled because it's a very LL sort of thing to have done. ... But you know, I appreciate that they did something for the holiday, didn't have to." Nalates Urriah noted that all those avatars caused so much lag, she and presumably many other residents couldn't see the video, and had to wait until hours later when there were only a few around, "I appreciate the Lindens taking the time to put it together. I just hope they realize how bad things have gotten when lots of avatars are present. ... It leaves my wondering if if we are going into one of those periods where the Lindens get ridiculously out of touch with the users’ experience." 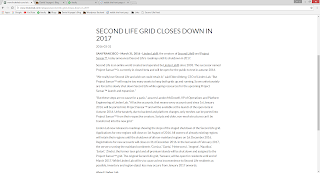 One other April Fool's joke was posted by a user of the High Fidelity forums, an official-looking statement announcing that Second Life would be closing at the end of the year. It got sent to some SL Universe users on it's email list, causing a bit of confusion. There is no evidence that anyone with High Fidelity was involved. Still, it did make a few people briefly wonder. 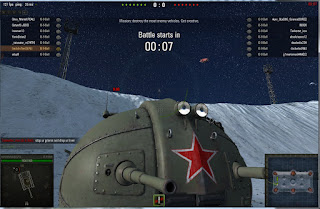 On a final note, when we reported on other examples of April Foolery across the Internet, we hadn't seen what "World of Tanks" was offering yet. What they did was to make a "Lunar Lunacy" map in which players controlled "Russian IS-8 Ball" tanks. While the ball tanks were armed, the best way to knock them out was to knock them into one of the six lava pits arranged on the edge like pockets in a pool table. For those who won ten battles on the map, one got a token for use anytime that would increase experienced earned by three times for an hour. To see a youtube of their April Fool stunt: Click Here.