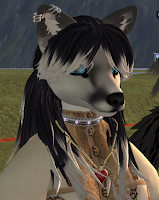 Nydia Tungsten has made a name for herself in the Sunweaver community over the past several years. Part wild child, part wise woman, one wasn't always sure which side they'd run into, or a little bit of both. Her mixture of naughtiness, wisdom, humor, and a willingness to always listen to one's friends in their moments of need, has long earned the "little white vixen" a place in the hearts of many. Because of her name and steadfastness, she's sometimes been called the "Steel Vixen."

But even the strongest of steel bends when the weight is just too much.

In recent months, her mother has been in poor health, and recently it has taken a turn for the worst. Days ago, the doctors sent her home so she could face the end with family. She was not expected to survive much longer. Circumstances that have left Nydia in tears. To complicate matters, her pets knocked her computer off her table, breaking it. She has been keeping in touch with friends via Facebook, email, and g-chat though an old laptop that simply can't handle Second Life.

Finally on Tuesday night, her mother passed away, leaving the family in mourning.

Between these events, she has told her friends that she does not know when she will be back.

The Sunweavers, and the Newser, wish Nydia all the luck and strength in these most trying of times.

Posted by Bixyl Shuftan at 2:00 AM