Almost a year after being suspended by Linden Lab for technicalities, Flea Bussy, the owner of the noted Grendles' Children store, has found himself in trouble again. This time, the problem was a real-life one when the apartment complex he lived in caught fire. Thankfully no one was killed, and the damage to Flea's apartment was from smoke and not heat. But the smoke was enough to render his computer damaged beyond repair. 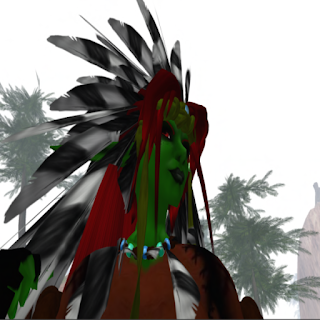 "The old one is toast," Toady Nakamura, Flea's partner and co-owner of Grendle's told the Newser. "He has an off-the-shelf one at the moment, which isn't truly his. But it's not enough to run well or fast in SL, and we're hoping to change that as soon as possible." Today thought that Flea could get a new computer in about a week, maybe less, if people bought more at the store, "we have some really great new avis, all mesh ... The Wing Chairs, which let you ride your friends along sitting in them. Really neat." Unlike the crisis last year, there is no real danger to the store this time, "We're fine on business. We have so much fun stuff that people keep coming to get it. The only request was to bring friends, buy stuff, take freebies, find the secret passage in the library which leads to the sleeping dragon, have fun."

Flea had been absent for four days before he had a chance to explain what happened through a phone call. His apartment complex is not a small one, but a "U-shaped" structure three stories high on one side and more on the other, with more than two hundred people. "He went upstairs to get someone out," Toady informed, "Way beyond what he needed to do to save himself. And got himself and the other down all the stairs and outside, then tried to persuade a pile of people who were plugging up the entry, because it was minus 20 degrees outside and snow, to exit before the smoke flared up into full flame. I think people who don't just save themselves are special. Especially how he described it, and of course everyone was sick with worry for not hearing from him for the four days he was in the Red Cross shelter before being let back in. Some people were rescued by the fire department off the balconies by the long ladders. It was one of those freezing cold fire events. ... Many of the building residents are elderly and so there was more than the usual pressure for rehousing and saving things."

Toady went on to say about half the apartments are occupied again. The other half will need repairs first, "everyone else is going to need to wait or move to a different apartment. ... I think they're moving as fast as they can given all the circumstances. Up where I live, that would be a huge disaster and people would be sleeping in RVs and barns because we couldn't rehouse 100 people overnight. But perhaps in a metro area, that is not much; it's all perspective."

Before going about her way, Toady reminded that she has been giving out building lessons at Grendle's, the times of which can be found in the store's blog: https://grendelschildren.wordpress.com/.