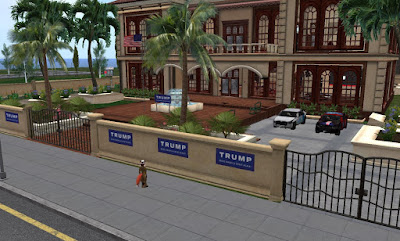 Our recent article on JP Laszo's Trump manor has been attracting attention, both for the Second Life Newser, and it seems for Second Life in general. Hamlet Au brought up the article in New World Notes. Then it was referenced by Kotaku, an online gaming magazine describing itself as "about games and things serious gamers care about." Done by the same writer who wrote about a neighbor of the Newser office founding a group in Steam protesting censorship in games, This inspired another writer for the magazine, whom described himself as giving up Second Life in the past, to log back into the virtual world just to check out the manor. 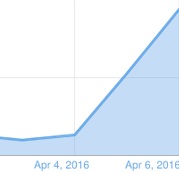 Love him or hate him, or reluctantly tolerating him, this media personality turned Presidential candidate has gotten no shortage of attention, which has certainly been a ratings boost to those offering stories about him. The divisive nature of politics has been a turnoff to some, particularly in the days since the end of the Cold War and the rise of politicians from the "Baby Boom" generation as those of opposing points of view have been seen less often as having just a misinformed opinion and more often being seen as insane, dumb, evil, or some combination of the three. But it takes money to keep media going, and those willing to pay advertising revenue are attracted to ratings. So you may be seeing more Trump soon.

Hopefully in the end, after the newcomers get their fill of Trump, they'll stick around to see what else there is to see and do in the virtual world.