With yours truly's "Fox Avatar Challenge" up in a few days, another of the Sunweavers has stepped up for another "Bid Me" style event: Dusk Griswold. Once again, a number of kiosks have been placed in the Club Cutlass lounge, a total of five, one for each of the five avatars in which the highest one determines what look she'll have on for at least a week, depending on how much is raised. 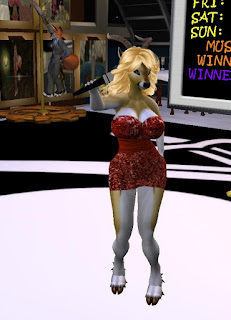 DUSK GRISWOLD has put herself for a BID ME!  She will transform for a minimum of 1 WEEK, into a RED FOX, GAZELLE, BUNNY, FENNEC, SQUIRREL!  Any bids that go over 5K get another week and for 20K, she stays stuck that avatar until RFL weekend.  So if you want to pick DUSKs' PLUMP avatar, get bidding!  Kiosks located in CUTLASS lounge area.


Dusk on occasion wears each of these avies, though the gazelle is the most recent one, popular among the Sunweavers due to the singing character of the same name in the movie "Zootopia."