Hopps To It: Bringing a Touch of "Zootopia" to Second Life. 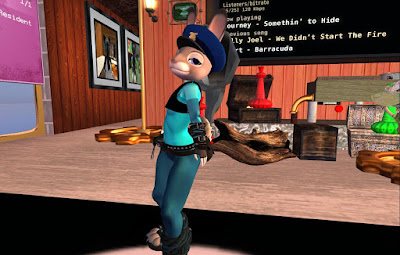 Taken by Rezzdammit Resident, Becky Shamen tries on an avatar and outfit looking a lot like the perky police officer Judy Hopps of the movie "Zootopia," which has gotten quite a bit of attention among my furry friends at Cutlass, notably the song "Try Everything" getting played many nights at the clubs. Although Judy was gray-furred in the movie, Becky's avatar did match an earlier concept sketch.

Zootopia has done extremely well at the box office, making 700 million by the end of last month, and is expected to make a total of over a billion. Not bad for a cartoon. As for the idea of a "Zootopia" themed event in Second Life, the running joke is that in this virtual world, it would be redundant.
Posted by Bixyl Shuftan at 6:01 AM