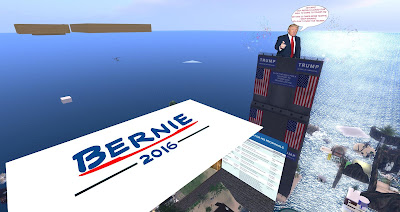 While writing my long-delayed article on the Bernie Sanders HQ, I decided to drop in on the place. It seems not only has the place expanded and moved to another spot on the sim, but it has a new neighbor: Trump supporters.

With Trump's call for a wall across the US-Mexico border, it seems a few of his supporters have bought some land next to the Bernie Sanders area in Caspoli, and constructed a wall standing 180m from sea level, with barbed wire on top and fireworks exploding around. The Trump side shows one large American flag painted onto the concrete. The side toward the Sanders HQ shows both US flags, Trump campaign signs, and a picture of Donald Trump pointing over the wall. A word balloon over the image taunts Macaria Wind, the owner of the Sanders HQ, saying hundreds got to the Trump HQ by clicking on the wall, "We have twenty times more traffic! I keep winning! You can't stump the Trump!" 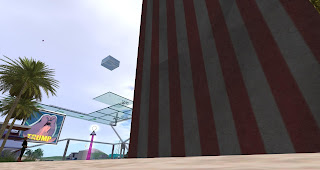 The owner of the wall, whom is listed as different from it's creator, had this in her profile: "I do not endorse any political candidate in this jank arse election. I just help friends that do." One of the neighbors in the Sporminore sim to the south reacted by erecting a picture of some creature, labeled "Trump."

Longtime users of Second Life might recall "The War of the Jessie Wall" (New World Notes), which happened very early in Second Life's history and what Hamlet Au described as "what happens when cultures clash and territories are disputed; when people misinterpret rules, or misapply them. It's about political debate, and what we believe to be political at all, depending on where we're from, and what assumptions we take with us, when we come here. And because you often learn the most about yourself when you come into conflict with others, it's also about the Second Life community's first challenge to define themselves." While there were no signs of shooting, it seems the verbal debate is being expanded into a virtually physical one, at least with walls.

The new and expanded Sanders HQ is at Caspoli (45/37/46). Turning around, you should be able to see the wall some distance away from there.