"Bid Me (Another) Foxy" - The Fox Avatar Challenge


Some of you may remember the "Bid Me Human" event I did for the Relay for Life a few years ago, a twist on the "Bid Me Bald" events a number of Relayers have done, notably Trader Whiplash. There have been other variants of the fundraiser, such as the "Bid Me Blond" by the Builders Brewery. And now it's time for me to step up for another challenge. 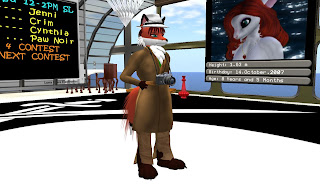 While it was suggested that I do another event for the human avatar again, my thoughts turned to another matter. Over time a few people have been telling me I need to update my Fox avatar from the Luskwood, which I've had since 2007, saying it's too old. While I've gotten my hands on a few other fox avatars over time, either as freebies, gifts, or the mesh tiny and micro foxes I got on my own, I've stuck with the tried and true Lusk as my main appearance.

So talking things over with a few people, I came up with a way to give those who think I need a new look a chance to put me in one, at least for a little while: The Team Sunbeamer Fox Avatar Challenge. 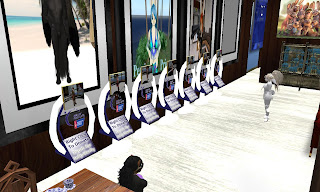 Sunnies/Beamers!  Bixyl has put himself up for BID ME Auction,  you have a choice of 6 different foxes and one skunk, you can BID Bixyl into.  You will find the Kiosks in the lounge area of Club Cut;lass.  Of course Highest Bid wins, you might even get a dance from the charming fox himself ...  So come on over anytime and place a bid.  Bidding will run till end on April, so plenty of time.  Length of time he stays in new form depends on how much you BID!  All donations go to RFL

At the lobby in Club Cutlass (the room behind the dance floor and DJ booth), seven Relay kiosks have been set up. One is the default or "Keep Bixyl Lusk." Five each represent a different red fox avatar, the Wingless, the AnthroXtacy (more often called AX), the Aventity, the Tokushi mesh tiny, and the Curious Fox Mod (which is a modified Uchi Chinchilla avatar). To make things interesting, the seventh kiosk is to bid me a skunk, of which the critter has been associated with the past with "Stinky the Skunk", "Skunk Aid", and "Bid Me Skunky" events. 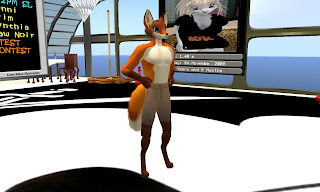 To chose a particular avatar, just go to the kiosk with it's picture and make a donation. The kiosks will stay up until Saturday April 23, when the results are totaled at 8PM. The winning kiosk will determine which look I'll have for a while, with the time period determined by how much was donated in all seven. For the first 5,000 Lindens raised, it's a week with the new look, with another day for each additional 2K. There are two stipulations. First, the challenge can go on only up to the Relay Weekend. Second, as yours truly is a reporter in Second Life, that means I may go back to normal at times (especially if the tiny avatar wins) in order to carry out my duties. But otherwise I'm stuck with the new look, at least until the challenge ends.

So come on over and make a donation to Team Sunbeamer's fundraiser for the American Cancer Society. If you'd rather I stay in my tried and true look, donate to the "Keep Bixyl a Lusk" kiosk. If you want to see a change for a while, drop some Lindens in one of the other six kiosks.