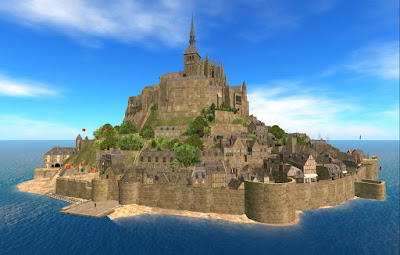 With Insilico recently having had a brush with closure, yours truly thought about another location that was put on the "Sim Deathwatch" list last year: Mont Saint-Michel. In late September 2015, the owner, Moeka Kohime, announced that the replica of the historic structure in northwestern France would be closing at the end of September. But the end of the month came and went, but the island remained. It was still up in late December.

Checking back over the weekend, over six months since the announcement of the sim's closing, Mont Saint Michel is still up for all to see. 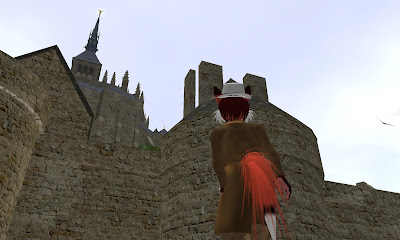 So why has the sim remained up? Perhaps the Lindens haven't gotten around to tearing it down yet. More likely, they simply don't want to. The location has been listed as an example of what can be built in Second Life. It continues to get visitors, more than a hundred whom are listed on it's Flickr page. So they have reasons to keep the place going besides avoiding the bad press that followed the closing of the SS Galaxy last year. So why hasn't Linden Lab bought the location like it had the ocean liner? Perhaps as everyone is happy with the way things are now, the Lab is inclined to keep it that way.

So the sim and it's picturesque structure remains up, at least for now. Many residents' experiences with Linden Lab have cautioned them against taking anything in Second Life for granted. With their tales in mind, perhaps it's best to drop by the place sooner rather than later, just in case the day comes the sim is no longer accessible, and then fades away from the map.