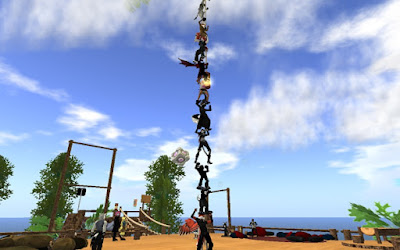 From March 1, 2008. It used to be in Second Life that avatars could "stack" on top of one another. And at Luskwood on occasion we'd try making a "furry tower." This one was eleven avatars high. I've heard stories of towers as high as two dozen people high before someone crashed or had to leave. But eventually the physics of Second Life were modified so avatars could no longer stack on one another so easily, and the "furry tower" activities became a whimsical memory of Luskwood's past.
Posted by Bixyl Shuftan at 3:00 PM