In a move that was completely unexpected, Linden Lab announced that it had been purchased by the Trump Organization, the primary holding company for the businesses and investments by Donald Trump, the billionaire and media personality whom recently has been making news as a leading candidate in the US Presidential election later this year.

"We at Linden Lab are happy to announce our merger with the Trump Organization," Ebbe Altberg, the CEO of the owner of the virtual world announced, "Our new partnership will allow us to make developments in virtual reality like never before." 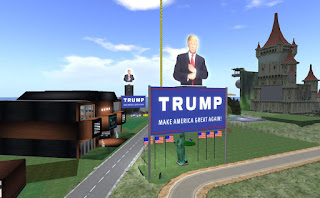 In an official statement by Donald Trump, he stated he had been impressed by past accomplish- ments by enterpenurers in the virtual world, such as Anshe Chung. and was looking forward to attracting new ones. It had also gotten his attention that among the users in the Gird were supporters of his, such as those in Second Life's own Trump Organization, and planned on making an appearance inworld soon, "Second Life is full of all kinds of people, smart people, socially upward, socially awkward, I love the socially awkward."

Developments are still coming in on what is clearly a turning point in both Linden Lab and Second Life.

For more information: Click Here.
Posted by Bixyl Shuftan at 6:05 AM