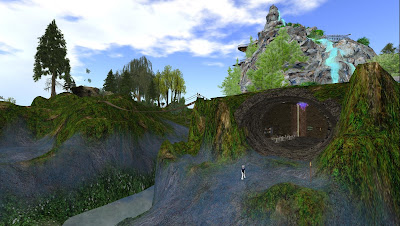 Cynthia Farshore, the owner of Farshore Radio, has moved her Goblin Cave. When first built in Pacific Waters a few years ago, it overlooked the Farshore Field airport. And when the airport moved to Sunlight Bay, the cave moved with it. But during the air show in June, it was revealed the hill the cave was in interfered with air traffic. But there was a solution: move the venue to Caledon Downs, which Cynthia acquired in April.

The main feature of the cave is the party and social area, where the music to Farshore Radio is streamed between events. People can dance on the floor, chat at the tables, or order a drink from the Orc bartender. The gremlin bartender from earlier times apparently ate after midnight. Taking the stairs, one can go down to a gaming area with pool, Greedy, and other games. Beneath that is the jacuzzi area. Above the social areas are picturesque cave, garden, and waterfall areas which one can explore around a little, relax with a companion, or turn up your draw distance and look around the surrounding area.

On the evening of Tuesday July 31 at 7PM, Cynthia held a grand reopening party for the venue, which a number of people attended. So far, the Goblin Cave is fitting in with it's new home region of Caledon quite well.