First impressions, while not everything, can mean a lot. And for Second Life, the first impression new users get is Learning Island. Having been around since 2013, they're part of a two-step process in which new arrivals first arrive in a place only they can be, and after some basic instructions head on to Social Island to continue their orientation, though possibly with the guidance with established residents. In 2017, they were remodeled with a new look. In a recent article in Modem World, Inara Pey stated over the past few months there's been something new in development by Linden Lab: themed Learning Islands. 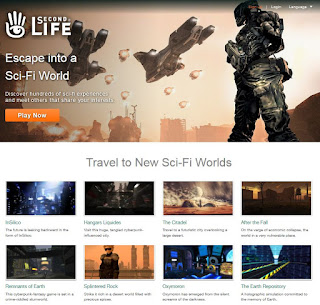 The idea is that Linden Lab will run various Internet advertisements with a certain theme, such as the science-fiction one pictured in Inara's article. Clicking on the ad brings up a page in the theme of the ad, and those signing up through it will be taken to a Learning Island that is in the style of the theme of the ad and page. These are not yet complete, still in the testing stage as Brett Linden told her.

Linden Lab is still in the early weeks of testing the concept of Themed Learning Islands. The initiative began quietly a month or so ago with a Romance-themed island test that is not currently active. Next up is a Sci-Fi-themed learning island that we’ll begin testing very soon. We’re also looking at several other themes for future tests, [and] it is also possible that we’ll revise the Romance and Sci-Fi themes as we gather more data on them.

Besides the themed ad campaign and sign-up process, the Lab will be looking into just how well it is working. It will also be looking at smaller elements as to what works and what doesn't, such as offering the new user a lot of information or having them find out more on their own. Patch Linden would state the new Learning Islands would not usually be open to established residents during testing.

We actually want to discourage public access to the islands while in testing so that our statistics, measuring and data-gathering don’t get influenced by having the islands inundated with established users coming into them and possibly preventing new users from naturally proceeding through the anticipated test flow. That way, we can gather as accurate information as possible on what’s happening in terms of acquisition and retention against everything else.

Talking to Brett, Patch, and Leira Linden, Inara came to the conclusion that the Lab was making a more intensive effort at user retention than before, "One thing that struck me ... is just what is going into user acquisition and attempts to improve user retention, when it is perhaps a little to easy to assume the Lab is just “tinkering without understanding”. Considerable thought is being put into trying to increase new user engagement and retention, and it does involve a lot of number crunching, analysis, and trying to build on what is shown to work, as well as trying entirely new approaches. ...it’s clear from talking to Brett, Keira and Patch that the Lab is pouring a lot of effort into this approach, as well as looking at other avenues of user acquisition and retention."

The earliest effort at the newbie experience, Orientation Island, was estimated to have only a ten percent retention rate. Destination Island, which was around from 2012 to 2013, was a bare-bones experience that was much more confusing and frustrating to new users and most likely had a much lower retention rate. Why a fair experience was replaced with a bad one back then, one can only speculate at the reasons why. But it's clear several years later, Linden Lab is making a much more serious effort to not just bring new people into Second Life, but to make a good first impression in the first hour or two that can make all the difference in which a new user decides whether or not to keep coming back.