UPDATE: The Lounge has been taken down 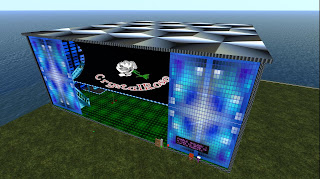 There's a new but promising club in the southeast corner of the Instruments sim: The CrystalRose Lounge. I had a few words with one of it's staff, CatNinja (Little Lockjaw), "I'm co-owner, also general manager."

Inviting me over, there was music being played by DJ Aria, from pop music from Disney. CatNinja would tell me there were two other DJs, DJ Lemonhead and DJ Turdpile, "'Turdpile' is more a throw to a friend at BlackMediaGames." The three DJs play most any kind of music except for rap. lakeishaFayrre Resident is the founder and owner of CrystalRose Lounge. 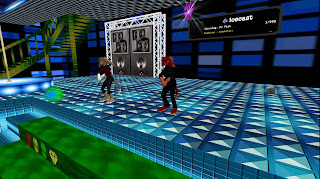 The Lounge itself is a two story building. The outside has the club logo on a sign curved inward. On the inside, the first floor has the dance floor and DJ stage. CatNinja told me they're in the process of making the ground floor look like an underwater area, "Down here, the floor represents a kelp forest." They still need to get items to make the undersea look more convincing, "I'm still looking for coral and kelp plants." The middle of the ceiling of the first floor had a rippling look, that was slightly red, "The underside of the water represents blood from a shark." "Fish blood of course," commented Angel Lefavre (Ltmeirna Resident).

There's not much on the upper story at the moment. For now, there are just a few games for people to play between events. But this will change. CatNinja says they plan to put a few more games there, "and we are accepting donations/tips & suggestions for new ones." People can already play the 7Seas fishing game there. At least one player of Tiny Empires was also around. Of the club's dress code, there really isn't much of one. All types of avatars are permitted in the club. The only really hard rule is, "No male bits. Furs may be naked (otherwise)."

CatNinja told me they plan to offer other parts of the sim up for rent to other residents. Despite the sims adult rating, she says they want to keep things "family oriented" for now, at least outside peoples homes. There are also three shops set up, with two rented, with plans for a mini-mall.

The CrystalRose Lounge is also hiring, wanting to have more DJs, hosts and hostesses, security, and dancers (not away-from-keyboard ones, but those who will respond to people, especially tippers). CatNinja says they're cooperating with the Drunken Parrot Tavern in the Sunweaver area on this, with a joint job application form (click here to read and fill out the form).

Update: Someone on the staff informed me that the Lounge has been taken down. While plans for the CrystalRose have been shelved indefinitely, the Drunken Parrot Tavern is still taking on new applicants (click here to read and fill out the form).