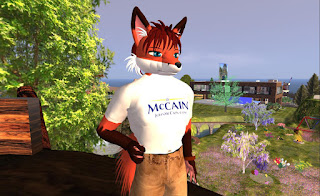 Some sad news. John McCain, the Vietnam War veteran turned political leader, passed away yesterday on Saturday August 25. He had been suffering from cancer, and had just announced he was no longer continuing his treatment. He was 81.

Besides serving as US Senator for Arizona for six terms, he ran for President twice. In 2008, he succeeded in winning the nomination of the Republican Party for the Presidential Election that year. And like many other things in real life, the election would be reflected inworld with various offices of a number of candidates inworld during the primaries, such as Hillary Clinton's. Although a few politicians such as Newt Gingrich had made appearances in Second Life earlier, these efforts were not the work of the candidates, but their supporters. For supporters of McCain inworld, they would meet at the "Straight Talk Cafe," named for the "Straight Talk Express," an expression of McCain's meaning he would do his best to be straightforward with the voters. The Cafe also handed out McCain t-shirts, such as the one pictured here. 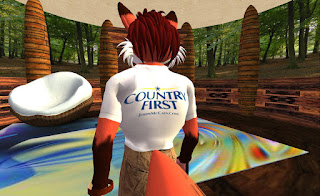 I would write about the election a few times for Second Life Newspaper, such as the watching the Presidential Debates from the Straight Talk Cafe, as well as Cafe Wellstone and Capitol Hill. And occasionally these locations would be mentioned in real life media, such as my local newspaper. I would also write about Election Night on November 4. But due to the stock market crash a few months earlier and resulting economic worries, McCain's campaign would lose much of it's steam, and Obama would win the election. After Second Life Newspaper closed, most of the election articles would vanish from the Internet. What I have left is the Election Night 2008 article, and the t-shirt.

In his concession speech on Election Night 2008, McCain called on Americans to come together. Maybe it's something we need to do a little more often.