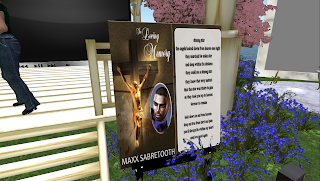 On July 26, a memorial concert was held for Maxx Sabertooth. Maxx was a live musician, whom was noted for his rhythm and blues music. He has been performing in Second Life for several years, at events as far back as 2012. He had performed at some charity events such as Homes For Our Troops, and the RFL Christmas Expo.

Unfortunately, Maxx was having trouble with his health in the past few years. In July 2017, a fundraising concert to help pay for medical expenses was done by fans and other supporters. Sadly, this was not enough. On July 20, there was an announcement in his fan group that he had died the day before. 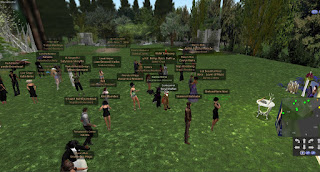 As many of you may already know, Our beloved Maxx passed away yesterday after a long fight with heart disease.  He was loved by all of us and his music will be missed by all.

Over the next few days, a memorial event was planned and a memorial grounds area set up. When all was ready, an announcement was made.

Please join us today as we remember the life of Maxx Sabretooth.  Memorial service starting at 4:00 pm SLT.  Please use the landmark as the memorial is taking place at Maxx Sabretooth Memorial Garden. 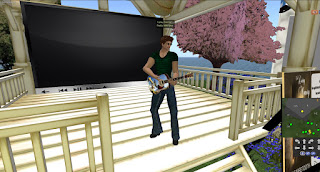 Several musicians would perform at the event, which included names such as Maximillion Klene and Keeba Tammas in the schedule. When I dropped in at 8PM, the concert was still going on with over forty people at the grounds. Frets Nirvana, best known for his Veterans' charity benefits, had taken the stage.

At 8:30PM, Paul Nowles would perform, going on to 9PM (Midnight EST), when the event came to a close.