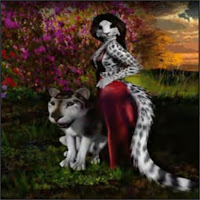 If you go about in a furry avatar full-time in Second Life, most clubs and other places will welcome you as long as you behave (especially if you tip). But there are a few that give you the equivalent of the bouncer at the door and tell you to leave because of your appearance. Sometimes the place is a historic RP area that won't make allowances for people wearing an observer tag, saying they want to preserve the period atmosphere, and won't allow humans not in dress code either. And then there's the club that gives no reason at all. Lia (Female Winslet) has been gathering a list of such places.

Read Lia's reader submission in Extra.
Posted by Bixyl Shuftan at 6:05 AM