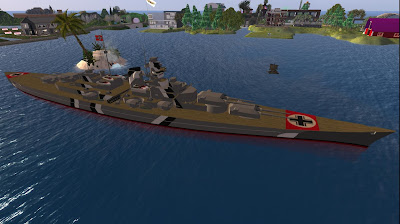 The SunWaterOne sim in the Sunweaver Estates often has some small craft going about in the waters. But recently a very big craft has been there: The Bismarck. It is owned by Rita Mariner

For those less than familiar with naval history, the German battleship had a short but active career in which it served one mission in May 1941 in which it was sent to raid Allied shipping but would end up the subject of a massive search by the British. At  823 ft 6 in (251 m), it was a quarter kilometer in length. The ship boasted eight 15 inch (38cm) guns, twelve six inch (15cm), sixteen four inch (10.5 cm) guns, and numerous smaller guns for anti-aircraft fire. It also had a catapult and four floatplanes.

Despite it's advantages, the Bismarck was eventually damaged by torpedo bombers, and following a long battle with two battleships, three cruisers, and six destroyers, it sunk, taking with it all but 114 of it's 2200 crew. Following the sinking, the Germans would make no more raids in the Atlantic with surface ships, instead relying on submarines.

In 1960, Johnny Horton would do a song in honor or the pursuit and battle, "Sink the Bismark."

It's possible the SL Bismarck might be used in a video. But if so, it'll be done in the Blake Sea region. The Sunweaver community waters are just too small to resemble open ocean.