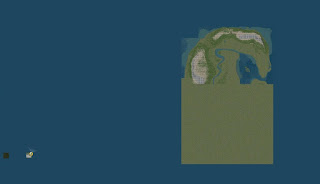 Remember the eighty-sim Linden-owned landmass that Tyche Shepherd discovered last week? The area is now considerably larger, or as Tyche put it, "SSP Got Bigggggger," having grown by over 300 sims. It is now 384 sims in size.

Less than half of the mass of land has been detailed into sea, mountains, rivers, and lakes. The majority still appears to be default green flat land. This is sure to change as time goes on. But among the new sims that was detailed was SSP124, which was made up of islands that looked like a smiley-face with the word "Hi!" and waving back at those looking at it from above. As Tyche put it, "Do they know I'm watching?" The answer seems to be yes. 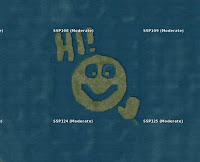 There's still no word from Linden Lab on what the land is for, though that hasn't stopped speculation, one person commenting after Tyche's post that she thought it would be for both Linden homes and a new game. It's possible that the details will be revealed in the Town Hall with Ebbe Linden next month. In any case, stay tuned for more information.