Banning Kake Broek hasn't quite made him go away, but it has made him angry.

About a month ago, the Newser reported on satirical artist Kake Broek (known as Adolph Chaplin on Flickr) whom had announced on May 31 he had been banned in Second Life. The Lindens basically stated he had been impersonating a Linden. Kake stated that he wasn't, saying the closest thing he did to that was have a tag "Not a Linden" over his head. 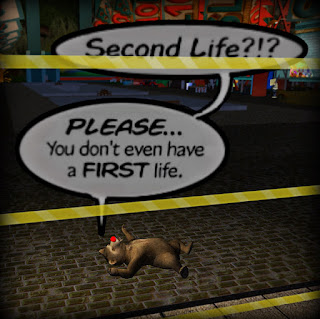 A few weeks ago, Kake was interviewed by Blog Veridical. There, he talked some about his art, "Maybe just cause I’m an intellectual so that’s a part of my own nature to have a critical look on everything. And I like caricatures, cartoons, comics, satirical drawings and so. That’s simply the combination of these two parts." When the conversation went to his banning, he clearly put the blame of his banning on one particular worker of Linden Lab.

Kake would also contact me.. Though he has yet to give me the okay to use any of our conversation for an article, he did point out a few examples of reactions to his acts on his Flickr page. Some were seen as amusing jokes. But other times his actions were seen as trollish, such as when he was banned from the SL10B for wearing a cartoon dialouge balloon with a certain phrase, and once at Social Island when he went about without pants but a long shirt that made a moderator wonder if he was being indecent. 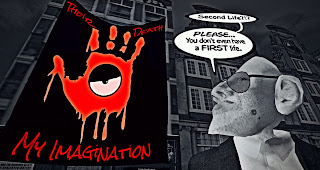 Kake has continued to make posts on his Fickr page (not all pictures safe for work). Time hasn't mellowed him though. His more recent posts showed anger, notably "3rd Life: Their Death, My Imagination." and another aimed at the one he blames for his banning. While Kake is known for his satire, the poke-in-the-ribs humor of other works of his is absent. Just anger.

"Provocation is a way of putting reality back on its feet," Kake quoted a man when commenting on the article I did about his banning. How the Lab will react to these provocations remains to be seen.