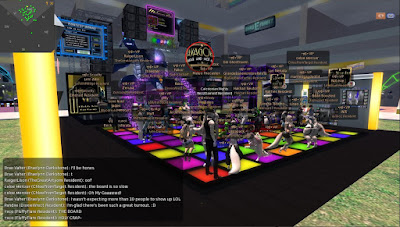 Tuesday August 28 was the day The Avagora Mall at Montecito Bay had a release party for a new product: the Milky Way Kirin Mod. The event had four raffles, three of which were for gift cards to the Milky Way store, the fourth which was for a free modded avatar. There was also a "Come As You Are" contest that started out for 3400 Lindens, but people added more and more to the prize, 5000 Lindens, 10,000 Lindens, and finally at 13,001 Linden dollars. "That board, think it was about to blow up," someone would comment in the Discord chat. There were about 42 people in the sim at one point, presumably all but maybe one or two at the event.