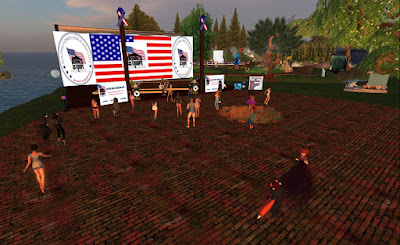 On Sunday August 26, a fundraiser on Veterans Isle took place. It was a monthly event for the "Homes For Our Troops" charity organized in part by musician Frets Nirvana. Several other live performers took part, including Zak Claxton, Toxie Darkmatter, Dirtydee Sweetwater, and Savannah Coronet. "Come on out, enjoy great music, and help support our extremely wounded vets!"

The fundraiser took in 287,300 Linden dollars, collected by the two kiosks on both sides of the stage. This was the first time more than a quarter million Lindens were raised for the charity at a single event.