For those who haven't done the latest "Gift Grab" from Linden Lab yet this week, (described in their blog post of the event and briefly at the end of our June 22 article of The Birthday), this week's area is a bit on the creepy side. The hint is, "Come and visit for a spooky stay. Once you enter you may never go away!" It is in the Falmouth Hotel in the Falmouth sim in the Bay City area. 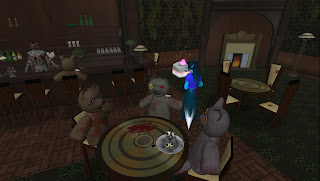 The description of the place is, "The Falmouth Hotel will reopen soon after some slight superatural damage is repaired." The scream I heard just after I arrived was a sign that it wasn't. The hotel was one creepy place inside and outside, with some low spooky music playing. Getting to the room where the gift was located, it was a bar with a bloody zombie bartender and some creepy-looking teddy bears. They were old, bloodstained, and had their eyes redone with buttons. One group was drinking what looked like blood in teacups and the other one had a desert bowl of eyeballs. There was some occasional childish giggling, and once in a while the teddys would break out into outright laughter, often while their heads were turned toward someone in the place. Creepy. 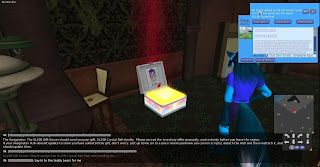 The room had been made by Governor and Michael Linden and Squishy, Crazy, and Silent Mole. What they were thinking of, who knows? A certain Bay City resident spotted me on her radar and messaged me, "Say hi to the teddy bears for me." I went ahead and got the Crystal Anniversary gift, and headed home. There, I rezzed the crystal it was packaged it, and got the contents. 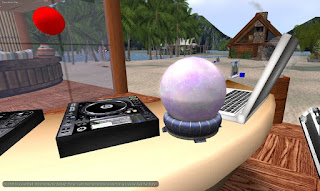 And this week's gift, a crystal ball. When rezzed and placed, when clicked on it will give you your fortune for the day. Occasionally, it will offer useful advice, "Don't just say that you are sorry. Mean it." But more often are witty and amusing comments, "May your hair ever be worn on your head." "Never sit on a pose ball you aren't prepared to make a commitment to." "A conclusion is simply the place where you got tired of typing." "Avoid loud noises and low-flying ducks."

This is Week Eight of the Gift Grab, which lasts until late September in which Week Fifteen is for those who got all fourteen of the previous gifts.