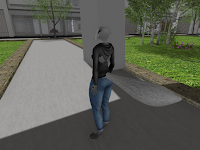 OpenSim virtual worlds have been the subject of renewed attention following the demise of InWorldz. Not every Second Life resident is a fan of them, as one responded when asked if he would set up a store in one that he considered it a copybot haven. While that was not true, some copybotting does occur in those worlds. Recently, Nydia Tungsten was going about in the Tranquility Grid when she spotted a mesh furry avatar being given out, and instantly recognized it as the same as one available in Second Life for months.

Read more in Other Grids, MMOs, and Games.
Posted by Bixyl Shuftan at 9:04 AM