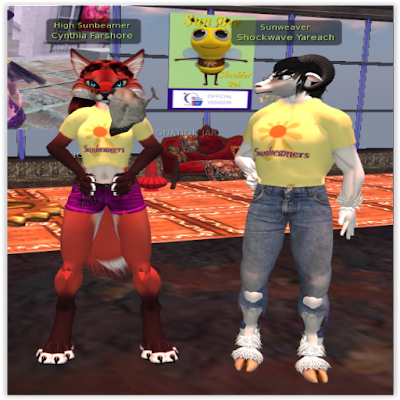 It was a great weekend for the Relay for Life in Second Life's Team Sunbeamers. Friday June 15 was the close of two "Bid Me" events run by the team, "Bid Me Foxy" in which Cynthia Farshore was putting her anthro goat avatar on the line, and "Bid Me Goat" in which Shockwave Yareach did the same with his wolf avatar. At Club Cutlass at 8PM following the party there, the amounts raised on the kiosks were made final, Rita announcing the results:

Beamers:  here are the results of the 2 BID MEs that ended tonight.

She goes Foxy for 12 WEEKS! 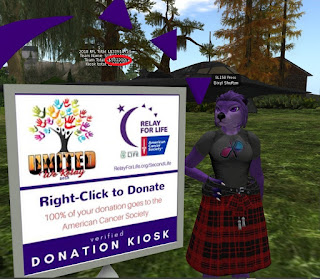 Cynthia took the change more or less in stride, when changing into a vixen having a chicken in her mouth, later saying, "Between the kiosk of Shocky and I, we racked up L$62,244." Shockwave posted on Facebook, "I was on the BidMe for Relay For Life. Every 2K$ put in, I'm a Goat for a week. I'm now gonna be a Goat for... 12 Weeks. Holy..."

The following day, Saturday June 16, was the Farshore Field Air Show. It was widely expected that the team would get to the coveted half million Linden dollar mark. And before the event was over, it did. The Sunbeamers passed 500,000 Lindens, and achieved Sapphire fundraising rank. For the second time this season, the team had achieved a rank they never had before. 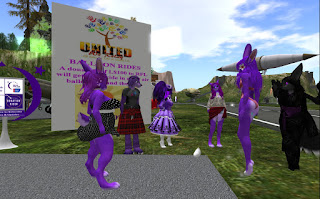 The last time The Sunbeamers reached this amount of cash, I went in a female avatar for a week. But with me pantsless most of the time thanks to a previous Bid Me event,  I wasn't in the mood for something so drastic this time. So when one of my teammates was saying she'd go purple for two weeks if the team reached Sapphire, I offered to take one of them. But team captain Rita Mariner and teammates Dusk Griswold, and Skylark Lefavre also went purple that day.

So what next? There is a joint event with the Meli's Maniacs team being planned. And of course there is the Relay Weekend and the Sunbeamer camp build next month. For now, once again the "Little team that could" is taking pride that once again it's proved itself a top fundraiser among the Relay teams.