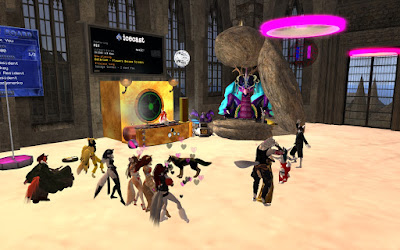 The Happy Vixen beach club and the Club Zero Gravity space club are the best known parts of White Vixen Enterprises, owned by Nydia Tungsten. But the organization also runs the Purrfection Estates sim, does a number of music videos, and more. Several days ago, Nydia threw a party the staff of the group at Mousehole Manor in Pacific Waters.

It is that time of year again, time for the WVE staff party to say thank you to all of YOU. YOU make these clubs and projects work there will be TWO THOUSAND L's up for grabs with DJ Snowbuns taking her turn spinning the tunes for you all. It will be at the castle from 7 to 10 slt


Besides the club DJs, hosts and hostesses, and managers, sim managers, and others, some friends of the group were also invited over. But only those considered staff were eligible for the contest prize of 2000 Lindens. DJ Snowbuns, aka Skylark Lefavre, played the music for the party with a mix of rock and pop from easygoing to energetic. Skylark does double-duty at the Happy Vixen as a manager and one of it's DJs. Club Zero Gravity is run by Ranchan Wiedman with help from Matoazma Kazyanenko.

A great time was had by Nydia and her friends during the event that went on for a little more than three hours. The large prize was split between three people. It was a well-deserved break for the staff.