Inauguration of the New Chancellor at the CDS 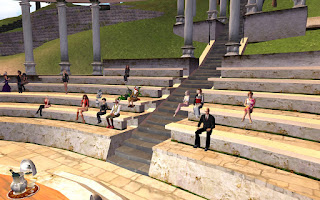 On Friday June 1, the Confederation of Democratic Simulators saw a transfer of power as the leader for the previous six months stepped down, and the new one took the oath of office. This was the day of Hannah Marie Tempestwolf's (Han Held) inauguration as the new Chancellor. In last month's election, Hannah had been declared the winner. Incumbent leader Rosie Gray had declined to run again for the office, choosing instead a seat in the Representative Assembly. 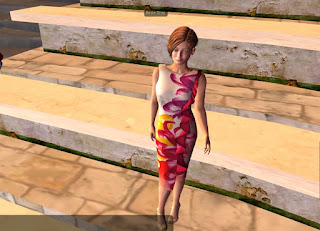 I dropped in shortly before the scheduled start at the Ampitheatre in Colonia Nova at 1PM SL time. Of the comments about swearing in the new leader, Lilith Ivory, the CDS Dean, whom is German, remarked, "Not having English as my first language I always have to giggle about the different meanings of swear (smile)." After a few minutes, the Chancellor-elect arrived. In contrast to the informal outfit I'd seen her in when I talked to her about the upcoming CDS election, Hannah was wearing a purplish dress. "All dressed up too!" Rosie commented, "Nice gown," someone added. 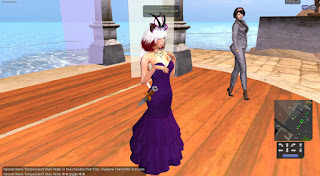 What followed was numerous cheers and applause. Lilith spoke, "Thank you Han for serving our community as Chancellor this term ... and may this be the last time during your term you feel the need to swear in public (smile)." "Thank you, Madame Dean," Hannah smiled back. Then she looked to the audience, "And thank you everyone from SL's oldest, perhaps ONLY, citizen run estate, for giving me the chance to serve y'all."

Kyoko (Samara Barzane) commented from the seats, "Do we drink now?" Lilith remarked, "We should!" Hannah joked, "Trust me, by the time my term is over everyone's gonna be driven to drinking (grin)." She would go on to say, "Thank you Bellimora and Ernie, my Mere Secundus /Funadama neighbors for coming down. And thank you to my SL parents; Sensual and Gregori. It means a LOT that you're here today (smile)."

The Inaugural Ball is this upcoming Saturday June 9 at 2PM at Neufrestadt Schloss.