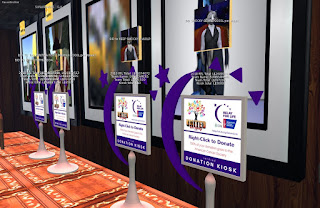 After a week, Team Sunbeamer's "Bid Me Foxy" is doing well, having raised 8500 Lindens so far. It's just been joined by another "Bid Me" Fundraiser, "Bid Shockwave Goat."

With Cynthia Farshore, who has always been known by her anthro nannygoat avatar, going canid for a while with "Bid Me Foxy," her teammate Shockwave Yareach is joining her with a "Bid Me" that turns things full circle. In "Bid Shockwave Goat," the Sunbeamer who is seldom seen without his anthro wolf avatar, promises to be an anthro buck goat for every week each 2000 Linden dollars, rounded down are raised. This means if 5999 Lindens are raised, he spends two weeks in his new look while 6000 would mean tin can jokes for three. And as with other Sunbeamer Bid Me events, there's a default kiosk for those wanting him to keep his usual look. If it gets more cash than the goat kiosk, he stays a wolf.

As of the writing of this article, 3000 Linden dollars have been raised. Meaning without lots of cash in the default kiosk, he'll be hooved for at least one week. How many more "bucks" the goat fundraiser gets remains to be seen.

Both Cynthia's "Bid Me Foxy" and the "Bid Shockwave Goat" run until Friday June 15 at 8PM, following the close of the party contest at Club Cutlass where the kiosks are. As of the writing of this article, Team Sunbeamers have raised a little more than 397,000 Linden dollars. With the upcoming "Club Crawl" and Sunbeamer Air Show, 500,000 Lindens and Sapphire level fundraiser status are within sight.