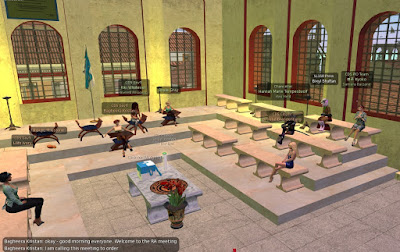 The CDS is a community in Second Life which unlike most has a number of rules and procedures as to how things are done. Among these is a local government which meets and discusses issues, sometimes voting on them. They recently chose a new Chancellor and  Representative Assembly, the latter sometimes called the RA for short. And Monday January 18 was first meeting of the Assembly. The meet-up took place at Colonia Nova in the Praetorium at 10 AM. Rosie Gray, whom was one of the members, stated both citizens and friends of the community are welcome and encouraged to come. And some did, including myself. Chancellor Hannah Marie Tempestwolf (Han Held) was also there.

There were a few things discussed at the meeting. Budgeting procedures were one. Another was rewording a rule about tier collection as it referred to Hippo vendors, of which the company closed earlier this year. Also brought up was the CDS website showing errors when people tried to go to the page. Hannah also mentioned the CDS exhibit at the SL15B.

Tomorrow at 1PM, there's a Government Hour, in which Hanna will be at the Chancellor's Office in Neufreistadt.