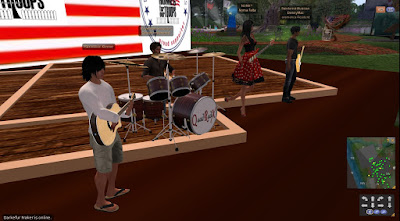 On Sunday June 24, Veterans Isle held their monthly fundraiser concert. The event, organized in part by Frets Nirvana, was in support of the Homes For Our Troops charity. From 4 to 9PM SL time, one DJ and a number of live musicians performed for the crowd, which at one point brought the number of people in the sim to 67 people. As the musicians played, people donated to two house-shared kiosks on either side of the stage.

Waya Snowpaw was the DJ for the first hour. Then David Csiszer sung live to the crowd. Following them was the band Quadradix. But there was someone extra among thing, singer Maxilillion Klene. It was in their hour that the money donated shot past the 100,000 mark. They were followed up by Nina Bing and Lyndon Heart.

The event raised a total of 153,200 Linden dollars. This was the biggest event that the Newser has seen at the Isle in months in terms of audience and cash donated.