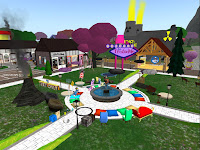 There are avatars of all kinds in Second Life. This includes the cartoon ponies made by fans of the "My Little Pony" cartoon which has aired for several years and has a attracted a following not just of kids, but also young adults (and a few not so young). Some of these fans in Second Life made a community for themselves, often called the Trotsdale community after the name of the main sim of the estates. Deaflegacy went by had a few words with one of the locals, and had a look around.

Read Deaflegacy's article in Places.
Posted by Bixyl Shuftan at 6:05 AM